Gag gift exchanges are a gas

Posted on December 5, 2010 by stillalife 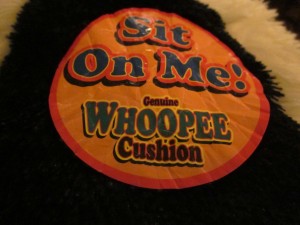 Gag gift exchange parties should be viewed as learning experiences.  I still consider myself a novice in the fine art of choosing unpleasant gifts, and have come to accept that it will take many years of study to raise my skill level.  I hope there are many parties ahead to allow me time to practice.

Three years ago my husband and I were added to the guest list of a party that had been running long enough to become an institution.   We were completely in the dark as far as what were appropriate gag gifts.  Our first year’s faux pas was choosing gifts that were mildly tacky, not horrid.

The exchange works like this.  Everyone draws a number that indicates the order in which each gets to choose a gift.  After the first gift is unwrapped and displayed by the recipient, amidst gales of laughter and trash talk from the lucky folks who didn’t win it, anyone who follows may capture a gift from its owner and avoid the sting of opening an even more tasteless gift.  Second time’s a charm for any given stolen gift, as it ends up the property of the lucky thief.   Year one we bought two cheap candles in the form of Georgian-style houses as one gift; I can’t remember the other one.  Imagine our shame to find that people were actually fighting over our gifts, a clear sign that we needed to re-calibrate our bad-taste meters the next time we went shopping for this group. 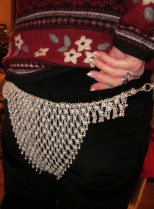 In year two we again failed.  The fact that our broken Nutcracker Man was considered a top-rated prize was clearly an indicator of the tastelessness of the other gifts, including the metal belly dancer panties that we won (seen modeled here).  So this year we came prepared.  I marched in proudly and announced that we had finally mastered the art of gift selection for this event:  a hideous work of wood carving and last year’s metal panties.

Wouldn’t you know it:  the rules this year had changed. Many guests were bringing tasteful gifts.  We ended up with the other two gifts, besides the ones we gave, that nobody wanted:  a “genuine Whoopie Cushion” in the form of a soft, fuzzy skunk and a can of habanero-spiced peanuts.   What’s funny is that as a kid, I remember seeing 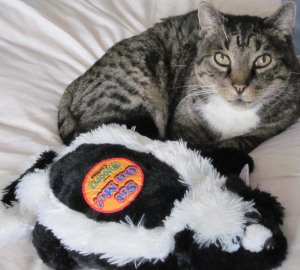 Whoopie cushions in local trick stores and thinking they were the most hilarious toys.  Given that childhood attachment, I can’t yet part with mine and have already found a home for it.

I was looking at the can of peanuts this morning (check out the Scoville heat-rating for habaneros) and I saw that it has a cookie recipe on the back.  I’m already feeling inspired about next year’s gift.

I retired June 30, 2010 after working for 40 years in the field of education and most recently doing school public relations/community outreach in a mid-size urban school district. I wrote for superintendents and school board members. Now I'm writing for me and I hope for you. In this blog, I offer my own views coupled with the latest research on how to preserve our physical and mental health as we age, delve into issues most of us over 50 can relate to like noticing wrinkles and forgetting where we left our keys, discuss the pros and cons of different ways to engage our minds and bodies after we leave the workplace, and throw in an occasional book review, all peppered with a touch of humor, irony, and just plain silliness. Also, I'm on the third draft of my second novel since retirement.
View all posts by stillalife →
This entry was posted in friends and family and tagged friends and family, life is fun. Bookmark the permalink.

1 Response to Gag gift exchanges are a gas