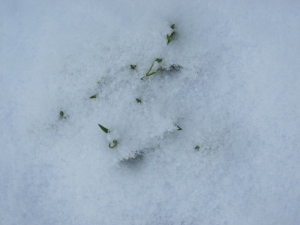 Imagine waking up to snow high enough to cover your day lilies (which decided to start sprouting leaves in late January), and a few hours later walking past flower beds filled with fragrant hyacinth, honeysuckle and daphne odora.  The contrast between indoors and outdoors was only one element that made this year’s Northwest Flower and Garden Show magical.

At this point I will confess that I am not a true gardener.

I love to dream about turning my backyard into an English perennial garden, getting lost as I wander through the chaotic growth and cutting fresh flowers for my table daily. In fact I have kind of a formal, terraced garden, which I ignore except to water and sometimes weed.  The plants more closely resemble the prissy Victorian dowager who never allows a hair out of place and wouldn’t consider languidly draping her arm over someone else’s shoulder to relax.

Sylvia, a friend for eons, and I chose the date of February 24 about a month before the exhibit came to town.  But this week began with forecasts of snow and below-freezing temperatures, and as the day approached we began to wonder whether we would be able to use our tickets, given the possible choices of driving there on icy streets or traveling via overcrowded buses operating on snow schedules.  We laughed on discovering that each had fretted about taking a bus from our respective, snow-covered neighborhoods only to find that the storm had bypassed Seattle entirely.

Once inside we left weather worries behind, immediately immersing ourselves in reading works by Mary Oliver and other nature poets, which were printed on white, gauzy cloth and suspended from high above us; studying the names of plants overflowing

the rims of colorful and stylish containers; viewing waterfalls and ponds, orchid varieties of every color, flowering cherry trees and gnarled pines; and listening to recordings of croaking frogs and songbirds.  I sat in on one lecture about attracting garden pollinators — bees, butterflies and other insects — which has me re-thinking some of my original plans for one flower bed.  It seems that some pollinators are seeking a setting akin to a shopping mall food court; they won’t even bother to drop by a backyard garden if they don’t see a number of the same kind of flowers as well as a variety of flowers. (Apparently honey bees, which are not native to this region, do not fall into this group.  They are not adventurous eaters and prefer to stick to one food, like kids hooked on macaroni.) 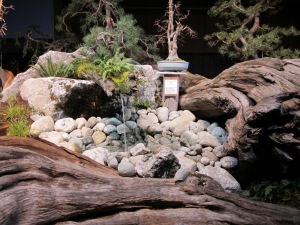 Although my plan was to take home only plant names, no prisoners, Sylvia and I found ourselves returning to several of the booths occupied by nurseries in our region, having discovered the perfect plants and tubers (per the photographs on their packages), and imagining that we might never see these gems again if we didn’t act quickly.  Which is why I found myself lugging my purse, several books, five packages of tubers and three plants only to be jostled by the standing-room-only, rush-hour crowd on a 45-minute bus ride home.

Today’s temperature has just reached freezing.  I’m waiting for the thaw so I can stick my tubers in the ground and assemble my container garden.  Then I can start to plan my pollinator menus.

I retired June 30, 2010 after working for 40 years in the field of education and most recently doing school public relations/community outreach in a mid-size urban school district. I wrote for superintendents and school board members. Now I'm writing for me and I hope for you. In this blog, I offer my own views coupled with the latest research on how to preserve our physical and mental health as we age, delve into issues most of us over 50 can relate to like noticing wrinkles and forgetting where we left our keys, discuss the pros and cons of different ways to engage our minds and bodies after we leave the workplace, and throw in an occasional book review, all peppered with a touch of humor, irony, and just plain silliness. Also, I'm on the third draft of my second novel since retirement.
View all posts by stillalife →
This entry was posted in luxury of time, seasons, the unscheduled life, touring town and tagged luxury of time. Bookmark the permalink.

1 Response to “Gardens of earthly delights”