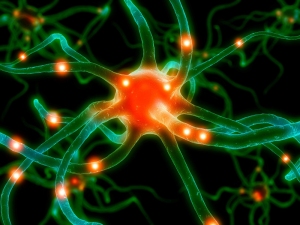 It’s only been a few weeks since I celebrated the end of a two-month stretch immersed in a nearly-1500 page book, which I have since donated to the library to be suffered through by some other compulsively stubborn reader.  And in this short time I recently completed a second wonderful book (the first one being 365 Thank Yous) called “My Stroke of Insight” A Brain Scientist’s Personal Journey, by Jill Bolte Taylor, Ph.D.  Never did I expect to take pleasure in reading about someone’s recovery from a massive stroke at age thirty-seven, but there I was unable to put down the book, except when reading about the parts of the brain.  Even these anatomy chapters had information of interest — just not of interest at 11 pm.  For example, I never knew that “our human genetic code is constructed by the exact same four nucleotides (complex molecules) as every other form of life on the planet,” including plants, reptiles and amphibians. (p. 13) This means that “we are all connected, we are all one” is not just a good theme for a sappy folk song, but a biological reality.

Dr. Taylor, who is a neuroanatomist aka brain scientist, worked out of the Harvard Medical School Dept. of Psychiatry doing research on the human brain as it relates to schizophrenia, and had received awards and praise for her paid work as well as her volunteer work for a non-profit mental health association.  Everything changed on that day in 1996 when she experienced a stroke.  The kind she suffered has a very long name, which is best left to its initials, AVM, and is a congenital disorder and rare form of hemmorrhagic stroke.  Simply put, the AVM stroke spills large volumes of blood into the skull and “blood is toxic to neurons when it comes into direct contact with them.” (p.23) Her left brain suffered the damage from the blood spill.

In the book she describes the sensations involved in the stroke itself, how she managed to get help and live, and her eight-year recovery.  She describes the effects of the stroke, which severely affected her left brain, as turning her into an infant again.  She had to re-learn everything:  how to sit, stand, walk, feed herself, talk, understand speech, read, recognize boundaries between physical objects, understand concepts of time and space. There seemed to be at least four influences in her successful recovery:  1)  good medical care; 2) a mother who, astonishingly, had the patience to raise her a second time from an infant state; 3) her background in brain research which kept alive a belief in the plasticity of the brain; and 4) an extraordinary physical and mental determination to recover.  She also benefited from a large support system.

What I found most interesting was her decision not only to return to being a fully functioning being, but to shape what kind of human she would become.  While she was having the stroke and during the months that followed, she discovered that with her right brain in control she could have spent all her days in a nirvana-like state, which she found very difficult to leave.  “I stopped thinking in language…I was not capable of deliberating about past or future-related ideas, because those cells were incapacitated.  All I could perceive was right here, right now, and it was beautiful.” (pp. 68-69)

Ultimately, as she worked to re-learn everything she once knew, she chose a more right-brained orientation than she had previously had.  How is this possible?  She was growing new neurons as she was learning and these are what give us our individual personalities. She chose not to relearn some negative behaviors she had before the stroke.  She urged her readers also to consider the possibilities of change, even without a stroke.  “Ultimately, everything we experience is a product of our cells and their circuitry.  Once you have tuned in to how different circuits feel inside your body, then you can pick and choose how you want to be in the world.” (p. 172)  While this may sound farfetched, given Dr. Taylor’s astonishing recovery from such a devastating physical blow, I’m happy to credit her for anything and everything she now claims to be able to do.

I retired June 30, 2010 after working for 40 years in the field of education and most recently doing school public relations/community outreach in a mid-size urban school district. I wrote for superintendents and school board members. Now I'm writing for me and I hope for you. In this blog, I offer my own views coupled with the latest research on how to preserve our physical and mental health as we age, delve into issues most of us over 50 can relate to like noticing wrinkles and forgetting where we left our keys, discuss the pros and cons of different ways to engage our minds and bodies after we leave the workplace, and throw in an occasional book review, all peppered with a touch of humor, irony, and just plain silliness.
View all posts by stillalife →
This entry was posted in inspiration and tagged inspiration. Bookmark the permalink.