“Pickled Okra” and other bluegrass confections 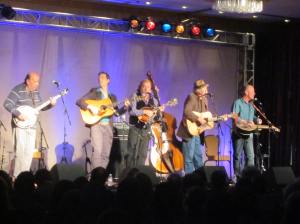 Ever heard of “Pickled Okra,” “Polecat,” or The Seldom Scene”?  I hadn’t either until our neighbors offered us their Saturday tickets to this year’s annual Wintergrass, a Bluegrass and Acoustic Music Festival. We decided to give it a try.  The event, twenty years old, but only in its third year here, was an easy walk and we knew if we didn’t like the music it would be just as easy to return home. We did eventually return home, but only after immersing ourselves in music for one entire afternoon and evening.

The last time we spent this much time in a gathering of different musical groups, we weren’t so close to home and leaving the event wasn’t easy. In 1969, we traveled to the Isle of Wight Festival to hear Bob Dylan, Moody Blues, Richie Havens, and others, but couldn’t leave even after the musicians had flown off in their helicopters. No one told any of the 150,000 of us marooned there that despite the festival ending at midnight, the next ferry didn’t leave until six a.m. the following morning, and there was nowhere to pass the night but huddled together on the concrete ferry dock.

I wasn’t sure what to expect from the bluegrass festival.  On the way there I told my husband I hoped we’d hear instruments besides banjos and fiddles, as they weren’t my favorites.

It turns out I had a lot to learn about bluegrass music, and spending ten hours submerged in it was the best teacher.  Yes, banjos and fiddles abounded, as did guitars, double basses, dobros, and mandolins, (I even saw one washboard), though not all the musicians played them the same way. Some played them with a rock ‘n’ roll accent, others added a jazz touch, and some played country-style. No matter how they played, all the musicians we heard played well. Exceptionally well. 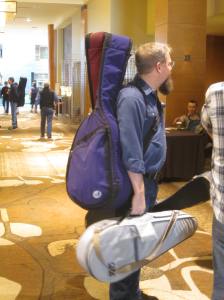 I also discovered that bluegrass musicians, professionals or not, don’t all have southern accents and they are not all male.  They do, however, walk around with one to two instrument cases on their backs and one in each hand.

As enjoyable as the scheduled entertainment were the informal groups of musicians that popped up in every alcove of the hotel’s conference center. Graybeards, adults, teens and children, sometimes segregated by age, but often not, came together to share a common passion for the music.  Their enthusiasm allowed the rest of us to delight in a dozen free concerts between or in place of the formal shows.

I’ve already checked the Wintergrass website for next year’s festival dates.  I wanted to save the dates.  I guess I can forgive the sponsoring organization for not sharing them yet.  The 2013 festival was still going on when I looked on-line.

I retired June 30, 2010 after working for 40 years in the field of education and most recently doing school public relations/community outreach in a mid-size urban school district. I wrote for superintendents and school board members. Now I'm writing for me and I hope for you. In this blog, I offer my own views coupled with the latest research on how to preserve our physical and mental health as we age, delve into issues most of us over 50 can relate to like noticing wrinkles and forgetting where we left our keys, discuss the pros and cons of different ways to engage our minds and bodies after we leave the workplace, and throw in an occasional book review, all peppered with a touch of humor, irony, and just plain silliness. Also, I'm on the third draft of my second novel since retirement.
View all posts by stillalife →
This entry was posted in exercise and tagged bluegrass music, Wintergrass. Bookmark the permalink.

1 Response to “Pickled Okra” and other bluegrass confections