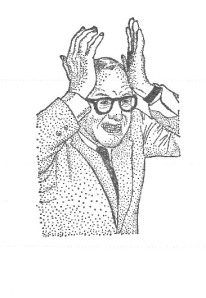 The iconic Mad Magazine cover character, Alfred E. Newman, says, “What me worry?”even though he looks like he should. Unlike Newman, I don’t look like I should worry, but I do.

I worry and I like making and reading lists.  But I never thought of uniting these two pastimes until I read two articles from the on-line newsletter, “Brain Pickings Weekly.” One article cites Umberto Eco’s book, The Infinity of Lists: an illustrated essay,” and reports that the book “charts the Western mind’s obsessive impulse for list-making across music, literature and art…”

My lists are less scholarly.  When I was working, I used to take great pains to create lengthy to-do lists before I left the office for the weekend. I never completed everything on any of my lists — ever — but they allowed me to imagine I had everything under control until Monday mornings proved me wrong.  Paired with my job to-do lists were my home lists. These focused on chores and errands. I never got to all the items on these either.

In retirement I only make shopping lists.  But that could change now that I’ve read another “Brain Pickings” article that describes the book, “How not to Worry: a 1934 Guide to Mastering Life,” by James Gordon Gilkey. I’ve always thought it would be nice to master a second language, the art of novel-writing, or throwing together a gourmet meal without a cookbook. But it never occurred to me that I could also master life. One way to do this, said Gilkey, is to create a “Worry Table.” (The origin of this tool has been attributed not only to Gilkey but also to Mark Twain, and an anonymous “military chaplain.”)

The worry table is a list of your chronic fears.  Gilkey (or someone else) found that his worries fit into five tidy categories. To these he added the amount of time he spent thinking about events in each category. Here’s his list: Disasters, 40%;  Past Decisions, 30%; Sickness: 12%; Children and Friends, 10%; and worries that have a real foundation, 8%. He concluded that by understanding the odds of his worries actually coming true he would eliminate 92% of them.

Artist Andrew Kuo went beyond a simple worry table to create a “Wheel of Worry.” In colorful concentric circles, he identified, “Subjects of Concern While Falling Asleep.” These include loneliness, death, money,  bedbugs, and the New York Knicks.  Beyond these topics he filled in the blanks under the heading, “Looking at my credit card statement makes me…” as well as listed his worries about what would happen if he won the lottery.

Like Kuo, my worries tend to be thoughts that come to mind when I awaken at three a.m and can’t get back to sleep. Unlike Kuo I never think of bed bugs, sports teams, credit cards or winning the lottery.  When pressed to come up with a list in daylight, on any given day mine will be short. Even so, the nighttime lists change often and stretch on and on. Making a whimsical chart featuring Alfred E. Newman, which includes the odds that the worry will become a reality sounds like just the antidote.

I retired June 30, 2010 after working for 40 years in the field of education and most recently doing school public relations/community outreach in a mid-size urban school district. I wrote for superintendents and school board members. Now I'm writing for me and I hope for you. In this blog, I offer my own views coupled with the latest research on how to preserve our physical and mental health as we age, delve into issues most of us over 50 can relate to like noticing wrinkles and forgetting where we left our keys, discuss the pros and cons of different ways to engage our minds and bodies after we leave the workplace, and throw in an occasional book review, all peppered with a touch of humor, irony, and just plain silliness. Also, I'm on the third draft of my second novel since retirement.
View all posts by stillalife →
This entry was posted in personal reflections. Bookmark the permalink.