The sameness of the world 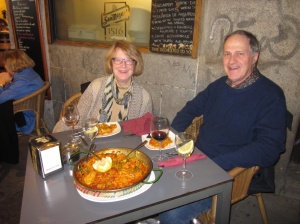 Europe. The United States. The first is characterized by much older buldings, many statues of dead kings and queens, better bread and pastries, and a better public transportation system, at least compared to the one where I live. There are some obvious small cultural differences. Parisians and Madrilenos, at least in warm weather, stroll the streets more, order their evening meals about the same time we’re falling sleep, linger over coffee or wine in a sidewalk cafe instead of gulping it down in few seconds, and perhaps do more activities as families even when their children are older. There are sure to be cultural differences that the tourist doesn’t see, so this is merely my view from the surface.

In most cases I can’t tell what country anyone is from until they speak. I haven’t yet discovered any other visible features that set apart Germans from French from Spanish from Dutch, from British from North Americans. All could wander around the U.S. without anyone noticing. This applies to people who have immigrated here from countries that were once colonies of France, Spain and the Netherlands. It may be obvious that a person’s roots can be traced back to Africa or the West Indies, but now they’re also French or Spanish. Clothing gives few clues because everyone in a particular age bracket, say 15 to 65, dresses the same. I remember teaching English as a Second Language once with another volunteer and feeling uncomfortable when she asked the adult students to wear a costume from their home country to class. I told her they were wearing their country’s costumes: jeans. And I was right. Jeans are very popular here, including the more expensive kind where the fabric come already slashed across the thighs and knees. Besides wearing undistinguishable clothing, most women wear little or no makeup.

With tattoos flowing up and down their arms and backs, young people in the West are undistinguishable. On both continents, the hands and eyes of young and old are grafted to their cell phones whether they’re walking, eating, chatting with friends, or standing in line.

Globalization creates a certain sameness everywhere. MacDonalds, KFC, Dunkin’ Donuts, and Burger King are in Madrid, probably in Paris also, but I’ve forgotten. They’re in Asia too. While not a fan of food chains, whether in Europe or the U.S., I’m not going to complain about the presence of Starbucks, especially in Paris. I’d like to thank Howard Schultz personally for allowing his Paris staff to let non-customers use their restrooms, but I won’t in case he doesn’t know.

Since we all look and dress alike, it’s a good thing that there are other differences to enjoy when we travel, like interesting and leisurely meals.

I retired June 30, 2010 after working for 40 years in the field of education and most recently doing school public relations/community outreach in a mid-size urban school district. I wrote for superintendents and school board members. Now I'm writing for me and I hope for you. In this blog, I offer my own views coupled with the latest research on how to preserve our physical and mental health as we age, delve into issues most of us over 50 can relate to like noticing wrinkles and forgetting where we left our keys, discuss the pros and cons of different ways to engage our minds and bodies after we leave the workplace, and throw in an occasional book review, all peppered with a touch of humor, irony, and just plain silliness. Also, I'm on the third draft of my second novel since retirement.
View all posts by stillalife →
This entry was posted in Uncategorized and tagged Madrid, paella, Paris. Bookmark the permalink.

1 Response to The sameness of the world