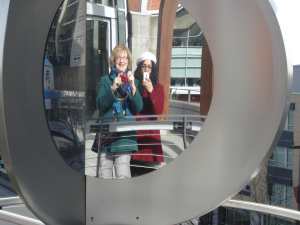 Anyone remember ‘pen pals’? The kids your age who lived somewhere else with whom you exchanged letters about your towns, countries and lives, until one or both of you lost interest?

My first pen pal was British. I saw her name in a kids’ magazine. Ads for pen pals were big in those days.  We wrote to each other on thin blue airmail paper called an Aerogram, which we folded into the shape of an envelope and sealed. Airmail postage was expensive and the lighter the letter the more affordable it became. I’m sure my letters to her were a lot like my diaries:  “Went to school.  Went to ballet after school. Played with _____.” Since I figured I’d never meet her I probably added a bit more glamour and excitement to my life in my letters.

My second pen pals were adults from Alma Alta, Kazakhstan, U.S.S.R. (now called Almaty, Kazakhstan). My husband and I responded to a plea during the Cold War from a local high school teacher to build relationships with individual Soviet citizens and further understanding among ordinary citizens. We wrote for a few years, sent photos and post cards of ourselves and our communities, but then the world changed.  The Cold War ended as did the U.S.S.R (I’m pretty sure we had nothing to do with either) and we lost touch.

A few years ago I gained an email pal, a young Iranian woman — Saeide — who had contacted a scholarly friend of ours to ask him about a translation of a Persian poem, which started an email correspondence.  She wanted to be a writer and study in the U.S.  I told him I’d like to email her, too.

Fast forward to the present. Saeide is in her second year of a Masters in Fine Arts program in the U.S. and pursing her dream to become a writer. For the first time I met my email pal in person. She’s in town for the AWP conference (Association of Writers and Writing Programs).  We spent part of an evening and a day together, talking about her goals — really, really ambitious — and mine — much less so. While I gave her a walking tour of my city she told me about women’s lives in Iran, her family, her American boyfriend, life as a teaching assistant in a required university English class, culture shock, homesickness — all the things you’d associate with someone coming here from another, very different culture.

She was delightful and fun to be with. As a result, we’ve done something that never could have happened between pen pals in the past, something that will keep us more connected to each other’s lives than ever before. We’ve become Facebook friends.

I retired June 30, 2010 after working for 40 years in the field of education and most recently doing school public relations/community outreach in a mid-size urban school district. I wrote for superintendents and school board members. Now I'm writing for me and I hope for you. In this blog, I offer my own views coupled with the latest research on how to preserve our physical and mental health as we age, delve into issues most of us over 50 can relate to like noticing wrinkles and forgetting where we left our keys, discuss the pros and cons of different ways to engage our minds and bodies after we leave the workplace, and throw in an occasional book review, all peppered with a touch of humor, irony, and just plain silliness. Also, I'm on the third draft of my second novel since retirement.
View all posts by stillalife →
This entry was posted in memories, personal reflections, writing and tagged email pals, Facebook, Iranians, pen pals, writers. Bookmark the permalink.