Psychologists say it’s important to stay connected to friends as we age. Recently, I figured out a good reason why. 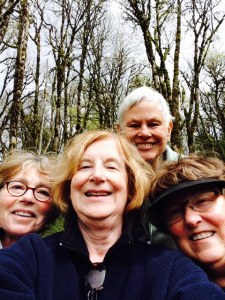 Me with friends I made starting in kindergarten

I reconnected with friends I knew starting in kindergarten. We spent three days at a cabin in the woods reminiscing about our collective pasts. Often, to our dismay, each of us told entirely different stories about the same events.

When we separated, I continued to think about past experiences. Like streaming video, much of my life played back to me, experiences I’d filed away and left stored in my mental file cabinet, too busy to think about. When I realized how many opportunities had been given to me, I felt overwhelmed and then joyful. My life to this point hadn’t been nearly as dull as I’d thought.

This takes me to a topic that people think about at the end of their lives, namely, their regrets. None of us wants to leave this earth lamenting our lives. But is it possible we’re missing many details when we reflect on our pasts while we’re alone? Do we need to pull a group of friends together to help us remember?

The most well-known report on the things people regret near the end of their lives comes from a book by an Australian nurse named Bronnie Ware, who interviewed her patients in hospice care during the last twelve months of their lives. The list of regrets she captured from listening to their stories included making choices based on others’ wishes and not being true to themselves, losing touch with friends, and not giving themselves permission to be happier.

I don’t believe it’s possible to live without any regrets. Part of being human is wishing for what we don’t have. Knowing what most people who came before us wished they had done differently might inspire us to make some changes now, while there’s still time.

Even if we can’t change the past, something we can change now are the stories we tell ourselves about it. And maybe we shouldn’t rely only on our own stories. How much did those in the hospice care study really remember when they told themselves they’d missed out on something important or made terrible mistakes? I suspect that squeezed into their daily routines were many more kindnesses, challenges met, moments of connecting with others, happy times, and personal victories than they had recounted to themselves when they looked back. And maybe those close to them would have told a different story about them if they hadn’t waited until the memorial service to share them.

I retired June 30, 2010 after working for 40 years in the field of education and most recently doing school public relations/community outreach in a mid-size urban school district. I wrote for superintendents and school board members. Now I'm writing for me and I hope for you. In this blog, I offer my own views coupled with the latest research on how to preserve our physical and mental health as we age, delve into issues most of us over 50 can relate to like noticing wrinkles and forgetting where we left our keys, discuss the pros and cons of different ways to engage our minds and bodies after we leave the workplace, and throw in an occasional book review, all peppered with a touch of humor, irony, and just plain silliness. Also, I'm on the third draft of my second novel since retirement.
View all posts by stillalife →
This entry was posted in personal reflections and tagged Bronnie Ware, friends, hospice care, kindergarten, regrets. Bookmark the permalink.