How to talk to old people 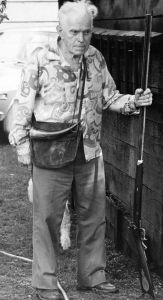 Grandpa Red, living in the past

While I was working, I never had occasion to work with a supervisor younger than I was.  Which is why I can’t speak personally to issues that arise when older workers have bosses from the millennial generation. (Depending on the source, this generation consists of 18 to 34-year-olds or those born between about 1980 and 2000.)

After following a link from the blog Time Goes By to an op ed in the Los Angeles Times, I’m pretty sure I don’t want to be supervised by a millennial. The title of the op ed is, “How Millennials Should Deal with Baby Boomers at Work.”  Up until now, it had never occurred to me that someone would need advice and training to deal with me.

Here’s one of my favorite quotes in the piece, which addresses the issue of those who are very tech savvy and those who are less so:  “What are the best practices for handling their Luddism and fragile egos?” In the case of Luddites, you should “tread gently” and never say, “This is so easy.” I believe fragile egos are handed out equally within every generation. I also think that as people age, they recognize their flaws and more readily admit to them, and that this is something younger workers aren’t ready to do, because at this stage in their careers they have more at stake.

Here’s another example of how to treat older workers: “It’s also important to signal to your boomer colleagues that you’re aware of American history prior to 1990, without threatening their conviction that lived experience is invaluable.” Recently, I sat in a theater reliving the assassination of President Kennedy (it was part of the script) while the millennials sitting next to us laughed. The theater piece was ironic, but many of the younger people in the audience — who probably were aware of this piece of history — were not sensitive to its impact on the country or to those who had to experience it again in the theater. Will the next generation laugh about 9/11 because they weren’t there?

The worse piece of advice is this: When an oldster talks about events of the past or tells a corny joke, “chuckle gently.”

Are some of the complaints of younger workers legitimate?  Of course.  “We’ve always done it that way” or “I’ve been doing it like this since you were in diapers,” isn’t going to improve work relationships. I adapted to technology on the job reasonably well, but I was always grateful that I could call on my younger assistant and tech staff members to get me out of jams and teach me new tricks.  And I realize that at a certain age it’s harder to change routines and work habits.

My issue with this op ed is that it is patronizing (meaning treat with an apparent kindness that betrays a feeling of superiority). Nothing the writer recommends will help build positive attitudes between employees of different generations.

Thankfully, this isn’t a topic I normally worry about, until I read the  Los Angeles Times piece. And after reading it, I’m very happy I had the luxury of retiring before anyone younger had to be trained to manage with me.

I retired June 30, 2010 after working for 40 years in the field of education and most recently doing school public relations/community outreach in a mid-size urban school district. I wrote for superintendents and school board members. Now I'm writing for me and I hope for you. In this blog, I offer my own views coupled with the latest research on how to preserve our physical and mental health as we age, delve into issues most of us over 50 can relate to like noticing wrinkles and forgetting where we left our keys, discuss the pros and cons of different ways to engage our minds and bodies after we leave the workplace, and throw in an occasional book review, all peppered with a touch of humor, irony, and just plain silliness. Also, I'm on the third draft of my second novel since retirement.
View all posts by stillalife →
This entry was posted in aging, current events/themes, intergenerational, personal reflections, technology and tagged baby boomers, confliccts in workplace, millenials, patronizing behavior. Bookmark the permalink.

3 Responses to How to talk to old people