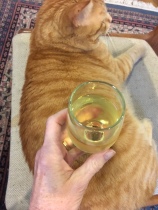 Not a cat video; he doesn’t move. And I had to include a wineglass

I opened up my Facebook page today and was greeted by ads to subscribe to The Economist magazine, and for a Subaru fall sale, State Farm Life insurance, and the Do-It-All Shoe. I also received a request, on a different page I administer, to pay FB to boost views — and thus attendance — at a long-past event. However, despite these efforts to pry into my buying habits, I still see value in FB.

It’s not that I don’t agree with those who criticize the social networking site.  It does have its issues. One source describes it rightfully as an “amoral corporation collecting personal data.” To anyone who uses FB regularly the personal data collection is obvious. My last car was a Subaru and I have State Farm insurance. However, I’ve never heard of the Do-It-All Shoe and am dying to know all that it does, but without having to click on the ad and support FB advertising. Though, if I thought it might clean the cat box I’d change my mind.

We all know other FB negatives, such as the 3,000 ads linked to fake accounts which were linked to other fake accounts set up by a “pro-Kremlin troll farm known as the Internet Research Agency.”

But I don’t turn away from FB any more than I turn away from searching with Google on the grounds that people use that to find pornography and white supremacists’ websites.  I wouldn’t be filling the pages of my historical novel, albeit very slowly, without Google and other search engines. And I wouldn’t re-connect or stay connected with friends without Facebook.

When I left high school I didn’t look back, not to teachers or classmates. Thanks to FB, I’ve not only written to, but seen elementary and high school friends and a college roommate.

Before retirement, I worked in a school system with 2,000 employees and knew many of them. Since retirement, I’ve never run in to more than a dozen of them, usually at the grocery store or a shopping mall, and see only a half dozen regularly. With FB I can keep up with the rest, as in people who have traveled and taken beautiful photos allowing me to see some of the same places they have. Or friends who should be congratulated for celebrating a birthday or a large-numbered anniversary. And I can follow up on plays or art exhibits that other friends have recommended.

Since I haven’t yet formed the habit of reading obituaries, Facebook friends sometimes share the important news about who is sick, dying or dead.

Funny thing: before writing this I thought I still kept in touch with many people I used to work with.  I just looked at my contacts’ list on my computer and realized that I keep up with most former colleagues through Facebook. So that’s the point, the reason why I can accept cat videos, too many pix of grandchildren, and even more pix of meals and wineglasses in the sunlight, because FB allows me to keep in touch and know that friends and acquaintances are usually content (if not, they don’t usually post that), aging well and making the most of life. What other tool can do that?

I retired June 30, 2010 after working for 40 years in the field of education and most recently doing school public relations/community outreach in a mid-size urban school district. I wrote for superintendents and school board members. Now I'm writing for me and I hope for you. In this blog, I offer my own views coupled with the latest research on how to preserve our physical and mental health as we age, delve into issues most of us over 50 can relate to like noticing wrinkles and forgetting where we left our keys, discuss the pros and cons of different ways to engage our minds and bodies after we leave the workplace, and throw in an occasional book review, all peppered with a touch of humor, irony, and just plain silliness. Also, I'm on the third draft of my second novel since retirement.
View all posts by stillalife →
This entry was posted in personal reflections, technology and tagged Facebook, friendship, privacy, social media. Bookmark the permalink.