“NaNoWriMo” is over and so is any hope for discipline

Posted on December 3, 2017 by stillalife 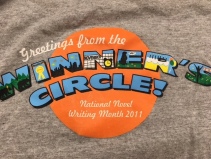 November was National Novel Writing Month, also known as NaNoWriMo and mispronounced by friends as something like “Nah, No Rhinos.”

My first foray into NaNoWriMo took place in November 2011. That year I participated fully, which means I started a novel and wrote 50,000 words in the month, which added up to 1666.67 words a day. I did this while blogging three times a week. At the end of the month, I bought the t-shirt welcoming me to the winners’ circle, but it didn’t fit. How could it, when I hadn’t left my chair for thirty days except to raid the frig?

As to how I managed all that writing, I can only say I was younger then. Surprising as it may seem, this exercise in carpel tunnel syndrome, neck-jutting and shoulder-rounding did have a downside.  Besides weight gain, that is. A few years later, after I completed my novel, I had only used one or two sentences out of those 50,000 words.

This year, I signed up for NaNoWriMo and set my own rules: write 700 words every day, and add to the novel I’m working on now; don’t even think about starting something new.  Even following my own rules and hardly blogging at all, the experience was a huge challenge. Why?  It took Discipline, a word I’ve capitalized because it wasn’t the kind of normal discipline, such as getting up early one day a month to get to an appointment on time, which my life as a retiree calls for. This discipline required writing from two to five hours a day for thirty solid days. I regret that it did not require I stay out of the refrigerator.

By the time I finished, I had brought another seventy pages into the world, pages that are keepers, at least for my first draft.

“I should do that every day,” I told my husband. I’d finish in another month or so. “All it takes is a goal and discipline.”

December 1 passed and then December 2. Now it’s December 3 and I haven’t put a word to a page. Why not? I don’t feel like it. What I would prefer is to keep eating sweets. To stop one bad habit and restart the good habit, I’m going to have to demonstrate more discipline, but it seems impossible to be disciplined in two areas of my life at once. So if I want to get the novel done, it looks like I’m stuck with having to eat desserts while I’m doing it.

I retired June 30, 2010 after working for 40 years in the field of education and most recently doing school public relations/community outreach in a mid-size urban school district. I wrote for superintendents and school board members. Now I'm writing for me and I hope for you. In this blog, I offer my own views coupled with the latest research on how to preserve our physical and mental health as we age, delve into issues most of us over 50 can relate to like noticing wrinkles and forgetting where we left our keys, discuss the pros and cons of different ways to engage our minds and bodies after we leave the workplace, and throw in an occasional book review, all peppered with a touch of humor, irony, and just plain silliness. Also, I'm on the third draft of my second novel since retirement.
View all posts by stillalife →
This entry was posted in current events/themes, humor, personal reflections, writing and tagged eating sugar, NaNoWriMo, overeating, writing, writing a novel. Bookmark the permalink.